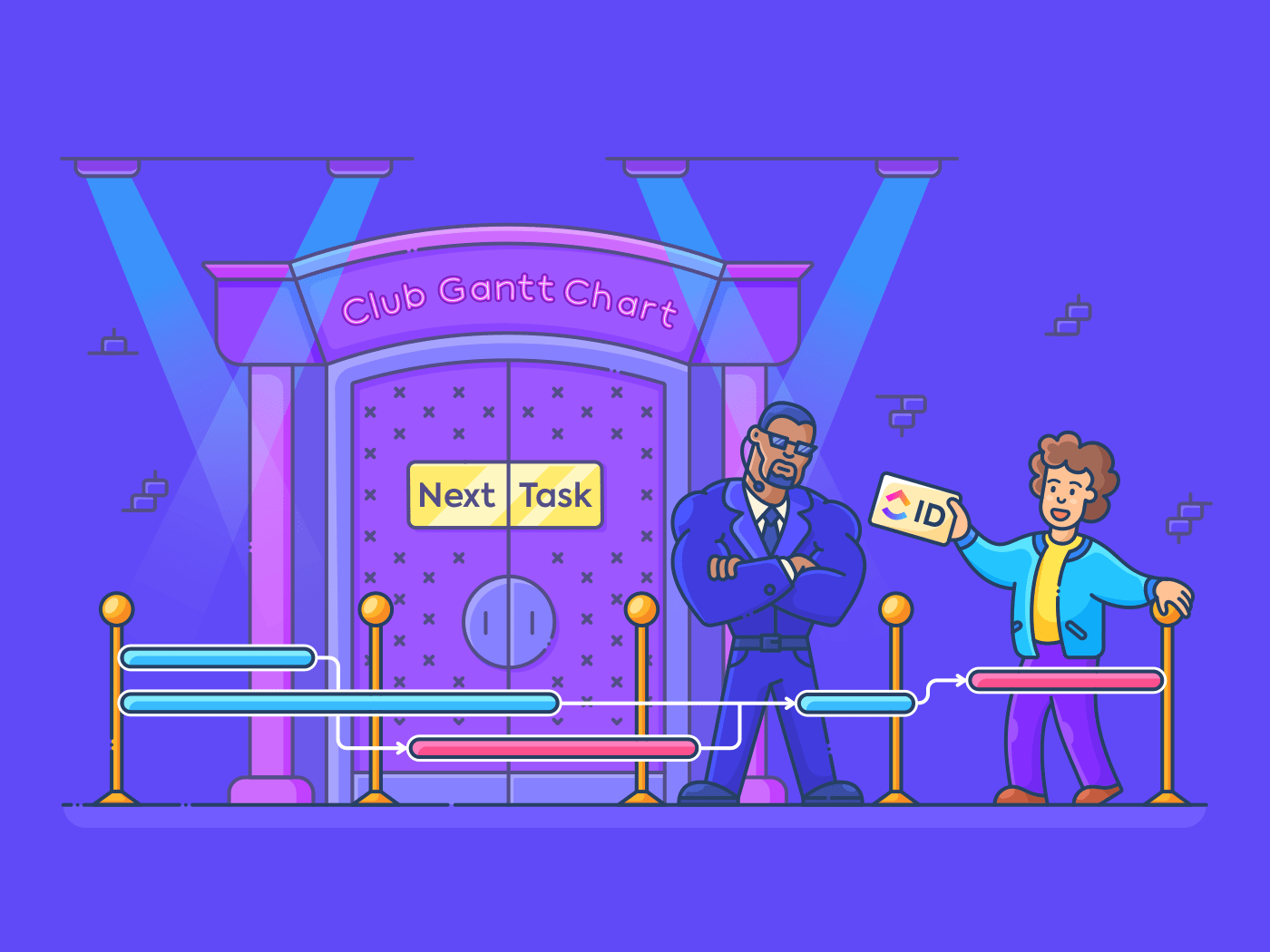 It’s only human to depend on other things or people.

Like depending on your morning coffee ☕ to become functional.

Similarly, projects and tasks also have their own set of dependencies. They help you define the relationship between activities to help you attempt them in the right order.

But what are Gantt chart dependencies, and how can you use them?

What Are Gantt Chart Dependencies?

Usually, task dependencies are represented on a Gantt chart, which is a kind of bar chart used in project management.

But apart from dependencies, Gantt charts also help you visualize the:

Albert Ho, Project Manager of the William Osler Health System and founder of Healthcare Heroes says, “Gantt charts are a key artifact when communicating with Project Sponsors and members of the project team.”

Check out our simple Gantt chart guide for more information.

Generally, there are four types of dependencies that you can use to identify a task relationship:

The FS dependency is the most naturally occurring one.

Here, the successor task can’t begin until the predecessor task is complete.

For example, let’s say you’re renovating your home. You have to create a design plan (task A) first, or you can’t start renovating (task B).

In this dependency or task link type, the successor task can’t conclude unless the predecessor task is finished too.

For example, you can’t pay the plumbers and carpenters (task B) unless they complete their job mentioned in the contract (task A).

This dependency type is rare.

For example, you can’t finish moving in your new furniture (task B) until the renovation (task A) has started. Once you’re done renovating, you can take your time to move in the new furniture.

In this dependency, the successor task can only start after the predecessor task has started.

For example, you can start sticking the wallpaper (task B) only after you start applying the glue to the wall (task A).

Lead time and lag time are important terms when referring to dependencies.

Lead time is the amount of time you can start a successor task before you complete the predecessor task.

Lag time is the time you need after completing the predecessor task before starting the successor task. In ClickUp, this is called the Slack Time.

Jon M. Quigley, PMP and CTFL certified project manager at TE Connectivity and Principal of Value Transform, LLC, shows how lead and lag times can be used to compress the overall schedule duration.

For example, if you can start a new task before the predecessor task finishes, you can apply a lead time to the new task so that the total project time is shorter.

Likewise, sometimes the next task will require several days in between, in which case you will need to add a lag time (Slack Time in ClickUp).

How to set and track dependencies?

You now understand the different dependencies, but how do you set and track them?

We’ve got just the tool for you.

Say hello to ClickUp, one of the world’s highest-rated project management platforms!

They’re much simpler than figuring out which dependencies are FF, SF, SS, etc.

If a task needs another task to be completed before it, then just set it as waiting on dependency.

For example, you need to add a milestone to your project timeline. So set it as waiting on. Add tasks like approval from the marketing team or stakeholders as the tasks it’s waiting on.

Additionally, the link to dependency works best when different tasks aren’t exactly dependent on each other but definitely are related.

And as a bonus, there’s no way to mess up your collaboration, thanks to the incomplete warning. This warning is triggered when anyone tries to close a task with a dependency.

Now let’s find out how easy managing Gantt chart dependencies can be in ClickUp.

How To Manage Dependencies In A Gantt Chart?

The internet may tell you to use a Gantt chart template or create one for yourself in Microsoft Excel or Word.

This is how you’re supposed to handle that situation:

If you don’t walk away from such suggestions, you may end up spending a lot of time and effort doing what ClickUp can do with just a few clicks.

Let’s see how you can use this powerful project management software to manage Gantt chart dependencies.

Creating a Gantt chart with dependencies has never been easier.

In ClickUp, it takes just three clicks to do this.

And that’s it. You’ve successfully created a Gantt chart.

After you’ve created your Gantt chart, you can select what data you want to view from the chart’s task bar on the side.

Choose your tasks from Lists, Spaces, or Folders to add them to the Gantt chart.

Step 2: Schedule all your tasks

In ClickUp, all your scheduled tasks show up on the Gantt chart by default.

So if you’re missing a task or subtask, it’s because you didn’t schedule it.

Let’s change that right away.

You’ll find all your unscheduled tasks listed on the sidebar of the Gantt chart. You can even add a new task from the sidebar to schedule it.

All you have to do is place your cursor on the same lines as the unscheduled task on the Gantt chart and click on the date you want to schedule it.

ClickUp also lets you adjust the task start date and due date from the sidebar.

Note: Since we all need some time off, you can choose to hide weekends. If you do this, any task scheduled on the weekend gets automatically rescheduled to the next working day, that is Monday.

Setting dependencies can sound like a super intense task.

And we don’t blame you.

However, it’s actually not that intense when you can visualize it.

And most importantly, it’s a lot easier when you’ve got ClickUp to help.

ClickUp’s Gantt chart is super easy to use, thanks to its powerful drag and drop functionality.

Powerful enough to set and reschedule task dependencies in seconds.

You just need to draw lines between tasks on the Gantt chart, and ClickUp will automatically set it as a dependency!

Ho says that being able to automatically adjust task schedules will save time.

“Instead of completing this manually, this is helpful when there are a large number of tasks, and for complex multi-year projects.”

Luckily, ClickUp can help you do this easily!

For this, ensure that “Reschedule Dependencies” is enabled under the View Settings or that drag and drop rescheduling won’t work.

So first, do that.

Now you can easily drag any task with dependencies to a new date without worrying about messing up the other task dates, dependencies, or the timeline.

That’s because when you drag such a task, ClickUp will automatically reschedule all the subsequent tasks in the dependency chain.

Relieved to hear that?

What if you need to reschedule an entire group of tasks?

Nothing complicated at all!

In ClickUp, a group of tasks shows up in a List, Space, or Folder.

Just drag and drop the entire group on the Gantt chart without messing up your timeline. The start date, end date, or due date of all your tasks will be readjusted accordingly.

Note: If your task dependency consists of subtasks, remember to enable ‘Remap Subtask Due Dates.’ This way, when you change the due or task end date of a parent task, ClickUp can automatically remap your subtasks by the same amount of time.

Task dependencies can often change during the course of a project.

Sometimes they need to be rescheduled, which you already know how to do.

But other times, they just become irrelevant, so you need to delete them.

To do this in ClickUp, all you have to do is hover over and click on the dependency line. Then select delete.

Oh, we know what you’re thinking.

What if you delete a dependency by mistake while hovering the cursor?

Don’t worry. You will always receive a warning before deleting a dependency.

Unless you hit delete, nothing will go poof. 💨

Some projects will finish on time, while others may have hiccups.

This can be a problem because…

Before you panic, this is exactly where calculating the critical path comes in handy.

Quigley emphasizes the importance of the critical path.

“Any delay of these tasks will cause the project to be late. [Critical path] is good for predictions and managing expectations early.”

This shows you only the essential tasks you need to do in order to complete your project.

We’ve already established that things are never complex on ClickUp.

So it goes without saying calculating the critical path on our Gantt chart will be a piece of cake. 🎂

All you need to do is spot the “Path Calculations” icon like it’s shown in the image below.

And then toggle on “Critical Path.”

You probably noticed “Slack Time” under “Critical Path” in the image. That shows you areas where you can adjust your tasks without impacting the project completion date.

Your project may have people like clients, external stakeholders, etc. that aren’t part of your workspace.

If they can join ClickUp, that’s perfect.

But if they can’t join, don’t fret.

Instead, say hello to public sharing!

It allows you to share your Gantt chart view as a read-only version that can be accessed using a secret link.

The only thing left to do is to track your dependencies.

The Gantt chart view already gives a lot of visual data regarding:

However, you can always track your dependencies on other views as well, including the List, Calendar, and Board view.

No, you don’t need to add dependencies again.

The views are flexible, so when you switch, all the set dependencies show up.

In the List view, you can even create a dependency column to display your dependencies that way!

Additionally, tracking things on our Gantt chart is like a fun game of spotting things. Here’s a quick game of I spy. 🔍

Oh, and if you want to know how much you have left, just hover your cursor over the bar, you’ll know your progress percentage!

Drag And Drop Your Way To Project Planning

You can set, track, rearrange, and visualize them right from the chart.

But only if you have the right project management tool for it.

An Excel template will not let you move things around easily with formulas.

The only tool that gives you flexibility, shareability, security, and customization is ClickUp.

This powerful productivity and Gantt chart software let you create tasks, set task duration, and assignees, plan projects, and so much more. Not to forget, you can create a Gantt chart for multiple projects in ClickUp with just three clicks.

All that’s left to say is:

Count on ClickUp to reliably manage your dependencies for free, so that you can get back to that morning cup of coffee you depend on!

Gantt Chart vs. Timeline: What Are They and How to Use Them

10 Agile Templates for Projects in ClickUp, Excel, and Google Sheets

9 of the Best Brand Management Software Options for 2023