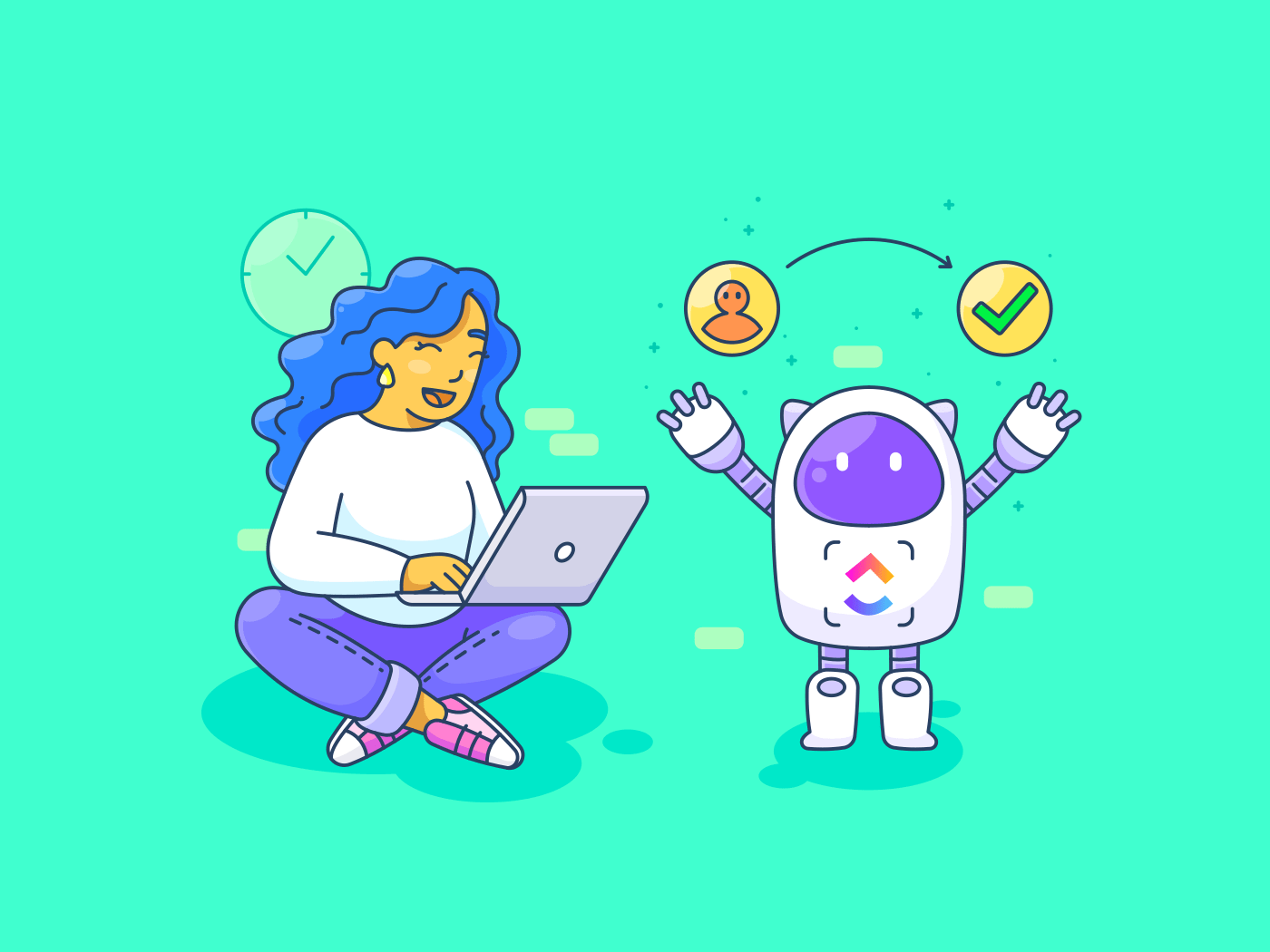 Regardless of the company type, location, industry, or department, every single manager wishes to:

Well, luckily, there’s an answer to these cravings—ClickUp Automations!

But process bottlenecks take many shapes and forms, really. And task automation helps you control those processes and shield them from productivity issues.

Whether you’re new to automation or looking for a way to optimize yours in ClickUp, this guide is for you. Continue reading to find out our selection of ClickUp Automation examples. Let us show you exactly how far Automations can take you.

What Are Automations in ClickUp?

Automations move a process forward in a step-by-step workflow to optimize task repetition so they can be logically executed without manual work. Whereas you can’t automate every task in your workflow, numerous decisions are made across tasks that repeat or are the exact same. And those could be easily automated to determine what comes next for them.

With automations, you have task automation software performing automatic changes instead of you for many reasons. That might be because you:

Now, you can automate only a part of a process or the entire process. It depends on how well-suited your tasks are for automation.

Then, a highly manual process might not be the best process to automate. You might automate the decision approval part of that process.

Oftentimes, automated tasks kickstart phases in a process. For instance, when a prospect becomes a client, or someone approves a final document.

Also, parts of your workflow automation may not be the most complex. But they add up over time and free up your availability to handle major, more complex ones.

When you automate workflows in ClickUp, you’re paving the way to boost your team’s productivity. That’s because Automations build momentum for employees, increases efficiency, and—best of all—reduces headaches from bumps in your processes.

They also help ensure deliverables get to the right people at the right time. But let’s get straight to the primary motivation for setting up Automations in ClickUp.

And why would you waste time and memory reminding someone to perform a task as soon as an event happens if there’s software that can do it for you?

ClickUp Automation features eliminate consistent, well-defined, repetitive tasks to save you time and effort. And all you have to do is fight the temptation to do those tasks yourself.

Automating small, simple tasks that seem quick to do at first glance will pay off in the long run. Because automated tasks free up your time for more intricate, human-dependent tasks that require case-by-case decisions or manual work.

Finally, team members and managers can also use Automation features in ClickUp to monitor processes. The goal is to make sure that a team follows steps and instructions as expected and previously described.

Examples of ClickUp Automations in Action

These are examples of Automations that you can set up in ClickUp regardless of your use case:

In ClickUp, tasks have general statuses, such as “In Progress,” “Review,” “Accepted,” or “Rejected.” And Automations allow you to configure ClickUp to do certain things when statuses change.

For instance, an Automation can assign the team leader to a specific task and send them an email when the status changes to “Completed.” You could even unassign the task or automatically add a comment to the task for someone specific to address.

You can set up ClickUp to do something when the person assigned a task shifts. For instance, you can define that when the assignee changes from the team leader to a team member, the status rolls back to “In Progress.”

Similarly to statuses, ClickUp tasks have priorities, such as “Urgent,” “High,” “Normal,” or “Low.” And you can configure ClickUp to react to priority changes in tasks.

For instance, ClickUp can archive a task once its priority changes from “Normal” to “Low.” Or it can apply a template to the task, such as a blog post template.

And one last example would be adding a tag to the task so you could categorize tasks and identify them by color in your workspace.

Generally speaking, tasks getting close to their due date should move up in the stack, right? That’s why ClickUp has Automations for when a task’s due date arrives.

For instance, ClickUp can archive a task and remove its watchers once the priority changes from “Normal” to “Low.” It can also apply a template to a task, such as a bug report template or a blog post template. Or add a tag to the task so you can identify it by color in your workspace.

When you create a task in ClickUp, you must associate it with a List, which is a task container. Now, imagine that a new procedure determines that every new task must be associated with a given List. Did you know you could use ClickUp to do this automatically?

Task-creation Automation in ClickUp assists you with enforcing procedures and preventing errors when your team and yourself create tasks.

Moved to this location

Do you want ClickUp to do something when a task is moved to a specific location? If so, then you need a “Moved to this location” Automation.

That’s a mechanism that guarantees that, for instance, every task moved to your “Blog post” List that’s inside your “Monthly newsletter” folder automatically creates a new task to “Create blog post.”

Elements of Automations in ClickUp

To automate tasks in ClickUp, you must follow the recipe of a ClickUp Automation. That’s “When this happens, then do this action.”

And this means you need at least the two mandatory components of an Automation to create one: Triggers and Actions. But you can also apply Conditions to Automation. Let’s go over these three concepts now, one by one.

If you want your process to start at a specific moment, Triggers are the solution. They’re events, such as a status change or a due date. And those events initiate certain actions, which you define in the Automation too.

If you prefer, think of Triggers as the “When this happens” part of ClickUp Automations. They start the Automation and originate an action (or series of actions).

If you haven’t noticed yet, the generic examples of ClickUp Automation we mentioned in the previous section are Triggers! But we can give you other examples of triggers you can set up in ClickUp.

Conditions are optional in ClickUp Automations. They allow you to control your workflow in more detail than when you use Triggers only. And unless the criteria defined in the Condition are true, ClickUp won’t run the Automation.

For instance, you can define a Trigger to reassign a task to the team leader when it’s three days overdue. Then, it’s easy to add a Condition on that Trigger to determine the reassign only happens when the current assignee is a specific team member who’s been delivering tasks late for some time.

This is a Condition on assignees to filter them for particular users, but there are plenty of other possibilities. Here’s a list with a few more examples of Conditions:

We talked about actions before in this guide! Remember when changes in tasks resulted in changing their priority, assignee, or status? Or when changes to a task resulted in applying a template, adding a tag or comment to it, or sending an email?

Well, there you go!

All the things that happened after changing a task are examples of actions. That is, when ClickUp triggers an Automation, something occurs. And that something is the Automation action (or series of actions) or the “Then do this action” part of ClickUp task Automation.

Actions are the work you automate via ClickUp, such as:

➡️ Read our article on how to use Automation actions!

You have three types of Automations in ClickUp:

ClickUp offers a library of Triggers and Actions to browse from and apply as-is. Use them as a starting point and make customizations specifically for your team.

Automation templates are an efficient way of configuring processes. And ClickUp has over 50 of them to apply to any Space, Folder, or List.

Combine ClickUp’s Triggers, Actions, and Custom Fields to create your own Automations. And customize them to meet the requirements of your own workflow.

ClickUp integrates with these external applications for you to configure Automations:

These integrations come with templates containing native Triggers, Actions, and Conditions that you can adapt to your needs. You can also use Custom Fields to fine-tune the Automations.

How to Setup Automations at the Space, Folder, and List Levels in ClickUp

ClickUp breaks work down into actionable items to structure your projects. Otherwise, you could have a hard time with automated project management on the platform.

Now, each space has its own set of enabled ClickApps for you to manage certain features, such as Automations. And if you define a ClickUp Automation at the space level, all tasks within that space will inherit the Automation.

The same goes for Folders and Lists.

This is to say that when you create the Automation, you have to choose the Space, Folder, or List to which you want to apply the Automation.

➡️ Check out our ClickUp Automation webinar for more details!

Over the years, we compiled an extensive list of ClickUp Automation examples from our users. And we’d love to share a few items in that list with you now.

If you’re a construction project manager, you can use ClickUp to:

If you’re a payroll manager, ClickUp Automations can allow you to:

If you’re an HR manager, automate your recruitment workflow with ClickUp to:

If you’re a lawyer, you can manage your law firm with ClickUp by:

If you’re managing a customer support team, you can define Automations in ClickUp to:

If you’re leading a software development team, set up ClickUp to:

If you’re a marketing manager, you can configure ClickUp to:

➡️ Get more information on how our marketing team uses ClickUp!

If you’re a product manager, ClickUp can help you:

➡️ Learn how ClickUp product managers use ClickUp to do all of the above and more!

Are you managing a sales team? Rely on ClickUp to do this for you:

ClickUp can help you make sure your product is living up to your customer’s expectations by:

Time to Get Your ClickUp Automations Going!

Now that you know exactly what ClickUp Automations are and how they streamline processes and task management, here’s the plan:

Coda Vs. Airtable Comparison: Which Tool is Better? 2023

The Top 10 Time-Tracking Templates for ClickUp, Excel, and Google Sheets