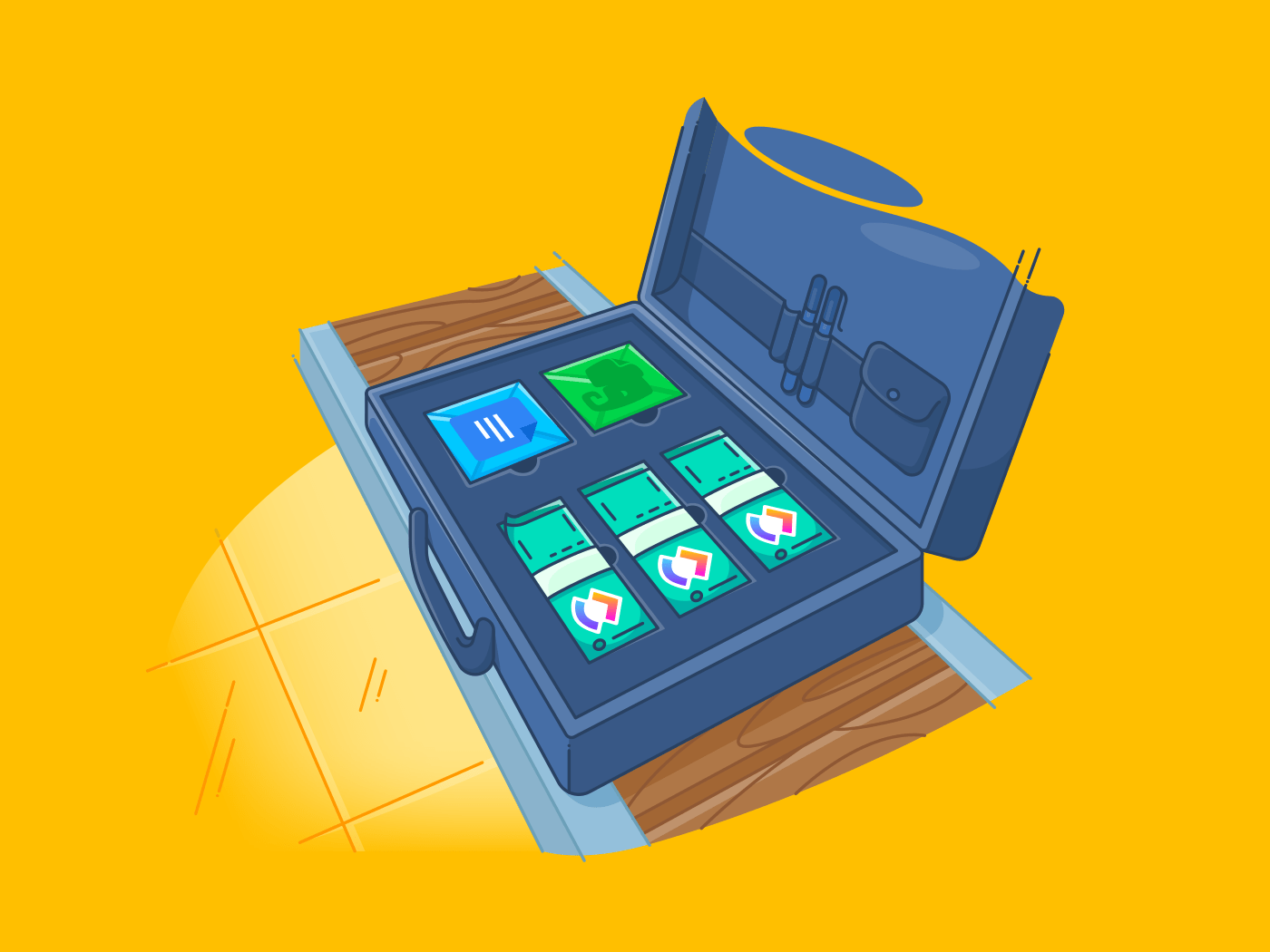 You don’t know pain until you write down key information on a sticky note only to misplace it before a super important meeting. 😫

It’s probably what set you off on a quest to find the best note taking app.

Well, you don’t need to look any further.

We’re giving you a headstart with a neck-to-neck Evernote vs Google Docs comparison.

Yes, there are other note apps like Microsoft OneNote, Dropbox Paper, Microsoft Word, and Apple Notes.

However, Evernote and Google Docs are pretty much the leaders in this domain and have a massive user base. That’s why it’s probably a good idea to start with comparing how they stack up against each other.

In this article, we’ll find out if Evernote or Google Docs will emerge as the note taking royalty! 👑

Note: We’ll first take you through the key features of Evernote and Google Docs to explain what each tool offers. Feel free to skip ahead to the comparison if that’s all you need.

With Evernote, you can capture an idea, create a quick note, and search for notes on the go. Safe to say that it’s a note taking heavyweight! 💪

Here are some of Evernote’s key features:

You must be wondering: isn’t a web clipper a pretty standard feature?

Evernote’s web clipper can clip web pages, articles, and PDF files. The tool can also capture full pages or just the sections you like.

It lets you take screenshots without any distracting ads and sidebars.

No more annoying targeted ads in your screengrabs!

The web clipper also has a browser extension (Chrome, Safari, Firefox, and more) that lets you save things you see on the web into your Evernote account.

Unlike a sticky note, a note taking app can save all your notes.

But what if you can’t find the note you need at the right time?

Don’t worry. Evernote ensures you don’t go on an Indiana Jones-style hunt to find your notes.

You can search for an Evernote note by:

Don’t feel like typing meeting notes during an important event?

No worries. You can record and store audio directly into Evernote.

Its free version lets you record a file size of up to 25MB per note. With the paid versions, you can record up to 200MB per note.

We’ve looked at the key features of Evernote. Now let’s see what Google Docs has to offer.

What Is Google Docs?

Google Docs is an online document processor that also functions as a note taking tool.

As part of the Google Workspace, Google Docs lets you create and format a Google document with other people in real-time.

That means you can say goodbye to confusing email threads and stressful team interactions. 👋

Let’s look at some of Google Doc’s features:

While working on larger projects or with a team, it’s crucial to keep track of the edits made to important documents.

You may want to hold your team accountable for their work or refer back to the edits in the future.

With a Google Doc, you’re just a click away from viewing a document’s version history.

You’ll be able to see who made the edits and when. If needed, you can also restore an older version of the Google doc.

But there’s a solution to this drawback.

You can extend Google Doc’s functionality by simply adding a third-party app to its add-on menu.

Creating notes can be hectic, and extensive typing can give you very sore fingers. 😰

Fortunately, you can use the tool’s voice typing feature to convert your voice notes into text.

All you need is a gadget with an in-built mic, and you’re good to go! 🎤

Now that we’ve covered the key features of our note taking legends, you must be wondering who emerges as note taking royalty.

Well, it’s only fair to have a detailed comparison to find out who wins this battle.

Let’s see how Evernote and Google Docs differ from each other:

Your note taking tools should let you share your notes quickly and edit them in real-time with your team.

Evernote lets you share your notes with anyone in your team via an email invitation.

But it lacks collaborative features that let you work on a note simultaneously with your team.

Let’s say two people work on a new note simultaneously. What happens next?

One thing’s for sure. Evernote’s lack of features for collaborative notes conflicts with its chances of being the best note taking tool.

Google Docs, on the other hand, takes the lead on team collaboration.

The main difference between Evernote and Google Docs is Google Docs advanced sharing capabilities. Google Docs lets you send your work to a specific person or your entire team. You can also permit collaborators to either view, comment on, or edit the document. Whereas Evernote doesn’t allow users to work on a doc at the same time.

But all isn’t great here. Google Docs is fully baked into Google Workspace. And if you’re not a Google user, this may be problematic.

Unless you organize them efficiently, your notes can end up buried in a folder, and they may never see the light of day again. 💁

You can organize your notes using notebooks, notebook stacks, titles, and tags on Evernote.

Here’s how you do it:

We’ll cut to the chase. Google Docs doesn’t have an organization system. Unlike the hierarchy in Evernote, Google Docs depends on Google Drive folders to help you organize your notes.

You know what that means.

Without careful management, this tool can create absolute chaos. 😕

This round goes to Evernote.

You may want to jot down notes on your phone while you’re on the move or conveniently access them from your laptop.

That’s why it’s essential to check a tool’s compatibility with different devices and operating systems.

The Evernote app is pretty much compatible with all operating systems: macOS, Windows, and Android.

You can also use Evernote on your Apple device—iPhone, iPad, and iPod touch.

Google Docs is a part of Google Workspace, and you can install it on several platforms like any other Google app. This includes operating systems like Windows and Android.

You can install the Google Docs app on an Android or Apple device.

Since both tools have decent platform compatibility, we’d say this round is a tie. 🤝

What’s the point of a note if we aren’t going to make and execute tasks from them?

Let’s see what our two note taking tools can offer on this front.

While Evernote centers around creating to-do lists, it has some basic task management features. These include setting up reminders, due dates, and assigning tasks to team members.

But (why is there always a but?) these task management features are only a part of Evernote’s paid professional plan.

Like Evernote, a Google Doc allows you to create to-do lists too.

It has no other feature that can directly address your task management woes.

However, you can use comments to assign your teammates some tasks. But this is only manageable for a small team and a limited number of tasks.

We don’t think giving either of the two note taking tools points for task management is fair. 😥

The competition’s gaining heat at this point.

While Evernote does well in organizing notes, Google Docs has better team collaboration features. The final say boils down to the pricing. 💰

Google Docs is free for individuals.

But for businesses, you’d have to buy it along with other Google Workspace apps.

We took to Reddit to see where people land on Google Docs Vs. Evernote. When you search Google Docs vs Evernote on Reddit, many users agree that if you are looking for a note-taking tool specifically, Evernote is the way to go:

“I use Evernote for all notes, articles and stuff that needs little organization (e.g. Evernote’s notebooks are sufficient).”

Other Redditors note that Google Docs is a better option for writing long form documents and reports:

“Google Docs is to me more like Word. I use it to write documents and reports.”

Are you thinking what we’re thinking?

For a note taking tool and a document creator with many limitations, these pricing plans seem unreasonable. 😐

That’s why neither Evernote nor Google Docs is the best note taking tool available today.

Let’s quickly recap the Google Docs vs Evernote comparison to show you why:

Sure, Evernote and Google Docs have some pros.

The main difference between Evernote and Google Docs is that Evernote lacks basic collaboration features, and the free version doesn’t have any task management features. Google Docs, on the other hand, lacks key features for notes organization and task management.

And the pricing… both tools are simply unreasonable.

Don’t worry. We did say we’ll introduce you to a powerful Evernote and Google Docs alternative. 😏

Here it is: it’s ClickUp!

ClickUp is one of the highest-rated productivity and project management tools used by productive teams in small and large companies.

It has better note taking features and is more affordable than both Evernote and Google Docs. 😎

Here are some of its powerful note taking features:

1. Take notes on the go with Notepad

With ClickUp’s Notepad, you can create as many notes as you want.

But the icing on the cake is that you can convert any of your notes into actionable tasks.

Sometimes you need to create more than just a personal note. That’s when you can use ClickUp’s Docs.

Use it to create a knowledge base for your entire team and share it quickly using a link.

There’s no page limit, so you don’t have to limit your imagination either!

You can also easily organize your notes by creating subpages within an existing parent page.

Let your creative side shine with ClickUp’s Mind Maps.

Using its Task Mode, you can convert your ideas to projects, tasks, and concepts.

The Blank Mode, on the other hand, lets you brainstorm and draw free-form mind maps.

These features can give any other note taking app a tough fight.

But ClickUp’s awesomeness doesn’t end there! 😎

We’re more than just a note taking tool. Here’s a list of some useful ClickUp features:

There’s no doubt that Evernote and Google Docs are good note taking tools, but they both have some serious drawbacks.

They’re both unreasonably expensive and have several limitations in organization, team collaboration, and task management features.

But since ClickUp is more than just a project management tool, it has more features than both these tools combined!

With a feature-rich Free Forever plan, this productivity app brings the best of task management, note taking, and team collaboration features (and more) to one single platform.