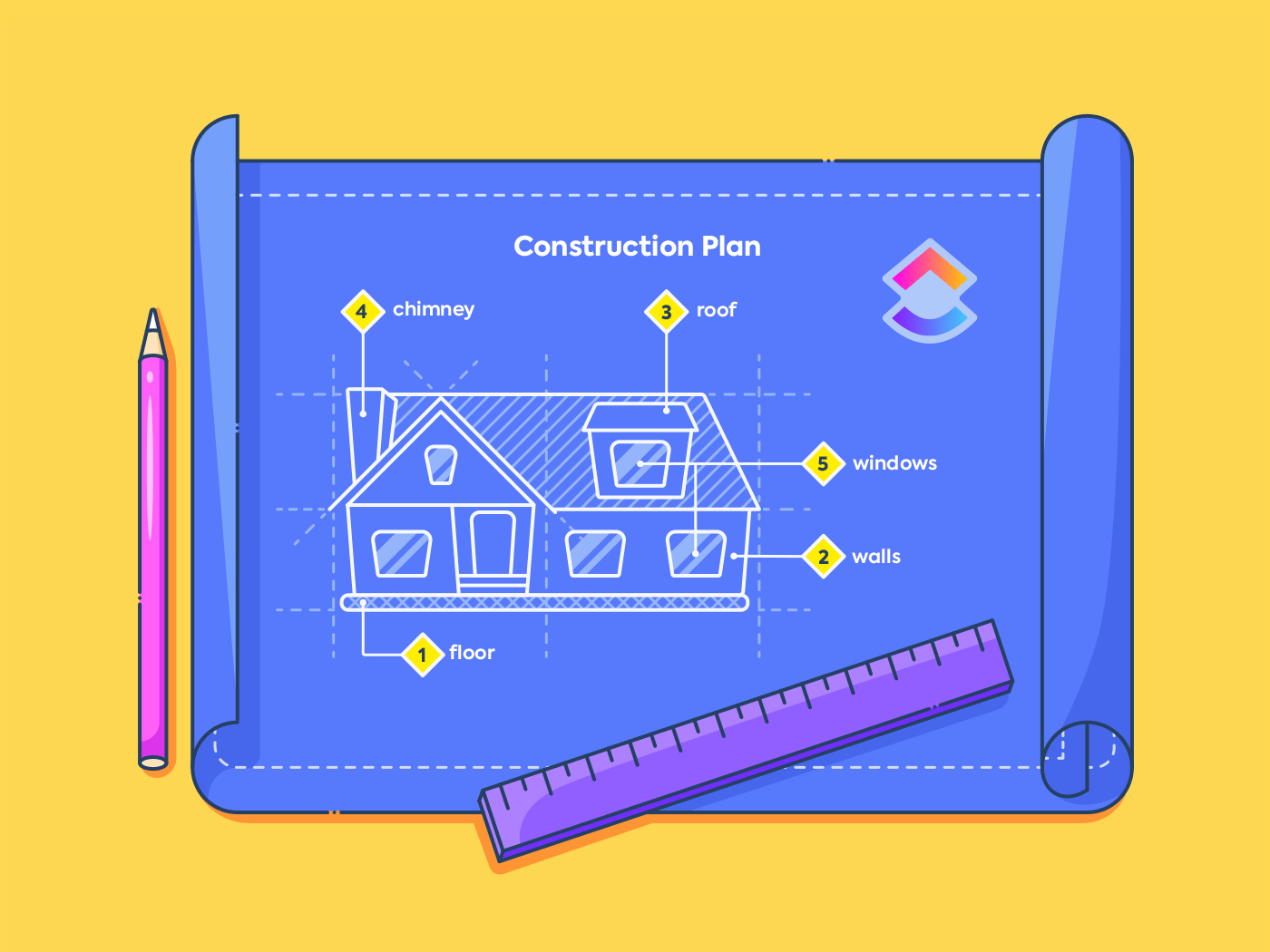 Looking for a project milestone example?

Milestones function as checkpoints on your project timeline. They help you easily identify

what stage your project is currently in and how far you are from completion.

They’re kind of like the milestones you used to find on the side of highways.

They let you know that you’re on the right track and can answer the one question that both kids and clients have in common: “Are we there yet?”

But what do milestones look like in real-life projects?

And what counts as a project milestone?

Don’t worry; we’ve got you covered.

(Click on the links to jump to a specific section)

What Is A Milestone In A Project?

Milestones are checkpoints that highlight the successful completion of major events, tasks, or groups of tasks along your project timeline.

Aren’t they used in video games?

In a video game, you reach a checkpoint after you complete an important mission.

Similarly, your team reaches a milestone when you accomplish something notable, such as:

(Maybe not that last one)

Want to learn more about project milestones? Check out this ultimate guide.

Why are project milestones important?

Milestones ensure that your team is moving in the right direction.

But that’s not all.

Here are a few more things you can do with milestones:

How Do You Identify Milestones In A Project?

A project milestone is usually an important event that occurs during a project’s life cycle.

Does any significant event count as a project management milestone?

Only events related to your project count as a key milestone.

Look, grabbing a beer with your team after completing the project is an important event. Unfortunately, it isn’t a project management milestone, as it isn’t part of your project timeline.

Although, we agree that getting that highly elusive approval from your project sponsor is certainly worth a beer or two!

What Are Project Milestones Examples?

Now that you now know what a project management milestone is, let’s take a look at the events that are usually considered project milestones:

Here are five project milestone examples that you’d find in most projects:

Let’s take a closer look at each project milestone example:

This is usually the first key milestone in a project’s life cycle.

Once the project is approved by an important project stakeholder or senior management, it serves as a green light for the project team to begin their work on the project.

For this major milestone, you need to closely go over a project plan with your clients and determine what the project is going to need.

Once you get all this approved, you actually begin work on the project.

However, it’s now time to draw up the project design and present it to the client or stakeholder.

Unfortunately, chances are that they’ll give you tons of feedback and utter these three terrifying words…

And when they finally do like it and approve it (after a million tries!), you’ve reached another major milestone.

Tip: If you want to adapt and integrate feedback smoothly, why not give Agile a shot?

Your project is now on the way and your team is working on building and implementing the designed solution.

However, working on a project isn’t just one long, drawn-out activity.

A project is generally divided into multiple phases like ‘the development phase,’ ‘the testing phase.’

To distinguish between these phases clearly, we use milestones at the ‘start’ or ‘end’ date of each phase.

Your team has finished building the product, and after rigorous testing and inspection, you are finally ready.

But don’t celebrate just yet.

You still have to present it to the main stakeholders.

If the project meets the requirements, then your stakeholders give their seal of approval, literally.

Your team can finally raise a toast to the project completion; you’ve reached the final milestone!

What’s The Best Way To Create A Project Milestone?

Now you have a clear idea of what typical milestones are.

But how do you create and use them in your project?

First things first, your project needs to have a goal.

Obviously, you can’t work without a project objective.

It’s like boarding a plane without knowing where it’s headed.

You don’t know where you’ll end up!

A project objective shows you how you’ll be able to accomplish the goal.

However, goal setting is the easy part.

The hard part is implementing it effectively.

Fortunately, with software like ClickUp, it’s a piece of cake.

ClickUp is the world’s highest-rated project management software that’s powerful enough to cater to all your project needs.

For example, with ClickUp’s Goals, you can break down large project goals into smaller Targets. These Targets function as adjectives and keep things organized and make your Goals more approachable by acting as smaller, manageable building blocks.

Now that your team is fired up, here’s what else you can do with ClickUp Goals:

Step 2: Structure your project into tasks and subtasks

Your project needs to have a detailed project management plan and structure to prevent things from going off-track.

The best project planning method is splitting your entire project into tasks and subtasks. This not only keeps things organized, but it also makes your project easy to track.

However, splitting a large project into dozens of tasks and keeping it well-organized might feel like a pain!

Fortunately, you can have ClickUp take care of it for you.

ClickUp lets you split any huge project into smaller tasks and subtasks. Each task also has a built-in project status bar so that the task owner can track the project 24/7.

ClickUp also lets you add Checklists to these tasks and subtasks. These are simple to-do lists for mapping small tasks like quality-check items. This way, your team can check them off as they progress.

Now that your project has a clear structure, we can finally move on to the best part: planning.

You’ll first need to arrange your tasks and group them according to different project phases.

Then comes the most important part: milestone planning.

Here’s what you do:

Basically, just identify the tasks that we mentioned in the milestone example section!

Now, assign milestones to them.

Sounds simple, but how do you keep the milestone list organized and neat?

With ClickUp’s Milestone feature, you can add a major milestone to a task with just two clicks.

Whenever you schedule a milestone to a task, the task name appears in bold. It’s even marked by a cool diamond icon in the List view or Calendar view.

Now your milestones are ready, let’s start mapping them.

But when we say mapping, do we mean using a milestone chart or a timeline template?

Neither. All of these are kinda obsolete in 2021.

What you need is a Gantt chart.

A Gantt chart is a visualization of your entire project timeline.

It lets you visualize useful project parameters like the:

Additionally, they map out every critical milestone and minor milestone of your project. This way, it becomes very easy to visualize your project milestone list.

However, some Gantt charts look like something out of a sci-fi movie, right?

We don’t blame you. In fact, most Gantt charts are needlessly complicated.

That’s why you’ll be star-struck (get it?) when you try ClickUp’s Gantt view that’s super-fun to use.

Not only that, but they also have a few powerful features too.

Here’s what they can do automatically:

Your milestones are added to your Gantt chart automatically. Milestones appear as yellow diamond icons on the chart.

How do you get them?

Just a single click on the Gantt view, and that’ll do!

It doesn’t get any easier than this!

Wait, these aren’t all of ClickUp’s features.

Here are a few more ClickUp features that can boost your team’s productivity:

What Are Some Common Project Milestone Misconceptions?

Hold on a second…milestones sound a lot like project goals and project deliverables.

Unfortunately, they’re not the same thing.

The last thing you’d want to do is to confuse milestones and project goals in front of the stakeholders!

Don’t worry. We have a list of common misconceptions about project milestones to help you out:

1. The difference between a milestone and a goal

Here’s how to differentiate the two:

Goals are objectives that you aim to achieve in the next few days or months.

Milestones are all the important things that you’ve already achieved.

Want an easy way to remember this?

When you think of goals, remember the Jetsons.

And when you think of milestones, imagine the Flintstones…Yabba Dabba Doo!

2. Difference between a milestone and a task

Tasks are actionable items that usually have a time estimate allotted to them.

(We’re pretty sure he’ll be able to ace this task in just a few minutes, though.)

Meanwhile, milestones have no time estimate attached to them.

They’re simply points on the project timeline (project schedule) that signify that a project task has been completed.

3. Difference between a milestone and a deliverable

A deliverable is a quantifiable result, such as a product or service.

However, a key milestone is an important moment in the project’s lifecycle.

Sometimes, completed milestones results in project deliverables, but that’s not always the case. For example, completing the first version of your app is a deliverable and a milestone. However, getting stakeholder approval isn’t necessarily a deliverable, even though it’s a milestone.

Always remember that milestones are key events that define your project success.

They not only help you track project progress but also serve as checkpoints, keeping you focused on your overall goals.

However, to make the most out of your milestones, you need to ensure that your project is organized and structured well.

And speaking of structure, a project management tool like ClickUp helps you plan and organize your work with ease!

But that’s not all.

Besides mapping milestones, ClickUp takes care of all your project needs like project planning, creating a work breakdown structure, project tracking, and a whole lot more.

So sign up for free with ClickUp today, and speed past your project milestones in no time.

Erica is ClickUp’s Senior Content Manager and professional beach bum. She spends her days creating emails, blogs, landing pages, and more to help people increase their productivity so they can save one day every week to do more of what they love.