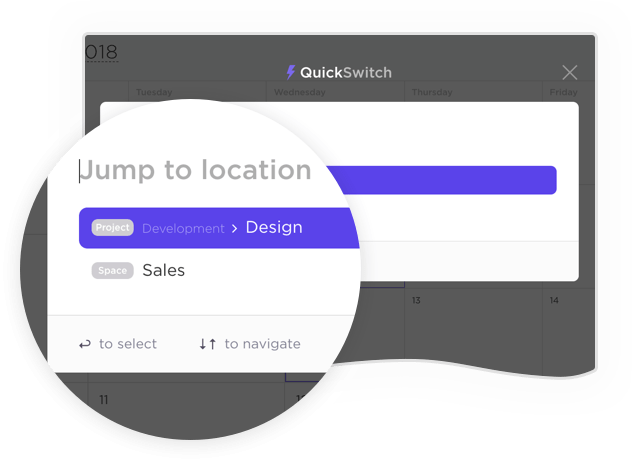 How did I ever function without this?

Much like /slash commands, QuickSwitch is another revolutionary feature that you didn’t even know you needed until you try it.

It’s an invaluable way to switch between Spaces, Projects and Lists without making a single click.

Now, you can navigate through ClickUp faster than ever before, and it’s completely reshaping how we use project management software.

Here’s how it works:

Anywhere inside of ClickUp, hit the letter “k” on your keyboard to open the QuickSwitchStart typing any place to go in ClickUp (Space, Project, List) and press enter to immediately switch your view.

For instance, if I want to go to any tasks or Lists with hotfixes, I’d hit the letter “k” and then enter “hotfixes” into the search bar.

You can also choose the lightning bolt in the top left of the menu to also pull up the Quick Switcher.

For more details on how QuickSwitch works, check out this help doc.

After using QuickSwitch with our own team, it was shocking how fast we could move around inside of ClickUp.

We’re always trying to reduce clicks and uncover the best productivity hacks for you inside and outside of ClickUp. This is only the start to fulfilling our mission of making the world more productive.