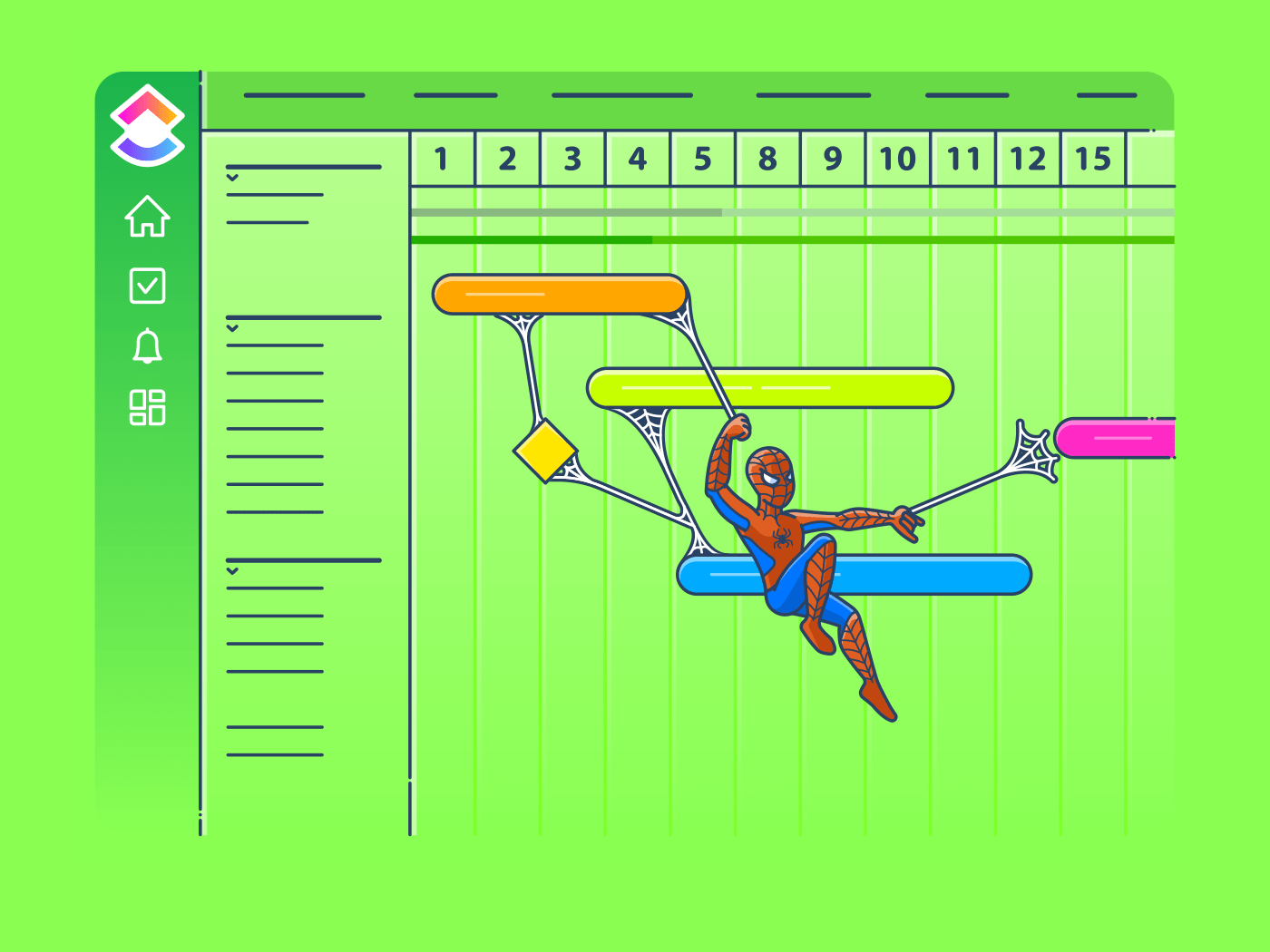 So what are dependencies in project management?

Kind of like how you depend on your accountant for finances.

Or your boss for approvals.

To put it simply, project management is impossible without dependencies.

In this article, we’ll discuss what dependencies are, the different kinds of dependencies, and how to manage them easily.

What Are Dependencies in Project Management?

Dependencies are any task, occurrence, or condition:

They help project managers understand the relationship between tasks, giving them a clear idea about the order in which they should carry them out.

Do you feel you could understand this better if you had an example?

Luckily, there are tons of project dependencies examples.

Here’s a simple one:

Let’s say you’re the project manager and have to discuss this month’s targets with your project team in a meeting.

This depends on you first having the meeting, right?

And that depends on your meeting preparation.

Right there is a dependency.

We get that project dependencies can seem a little daunting at first.

But don’t worry, here’s a breakdown of some specific terms related to dependencies in project management:

The most common is the triple constraint (time, cost, and scope) but there are other factors such as regulation, environmental issues that make up all the constraints.

For example, a particular task B is supposed to start in five days, when task A completes. However, predecessor task A got deleted, so task B began in seven days. As a result, task B is considered to have a lag of two days (5+2)

For example, task B must start when task A completes, and that’s in eight days. However, if predecessor task A is completed early, and task B begins in just five days, then task B is considered to have a lead of three days (8-5).

Types of Dependencies in Project Management

Note: This is a detailed look at the different kinds of dependencies you may encounter when managing projects. However, if you want to just skip ahead to learning how to manage your dependencies, click here.

Types of dependencies based on conditions

Here are some of the common major dependencies you may face.

You can’t carry out tasks with logical dependencies simultaneously.

Resource based dependencies are spotted when two or more tasks need the same resources for completion. There could be only a limited number of these resources. The resource can be a team member, an imported component of a machine, funds, skilled professionals etc.

For example, you need the hard drive that contains this month’s reports. Unfortunately, so does the finance team. So one of you is going to have to wait!

This is when different cross functional team members or departments depend on one another to complete a complex project or project activity.

For example, the marketing and engineering team depend on each other to work on a product launch campaign.

There are always some things that project managers can’t account for in the project plan because they’re out of their control. Those are external dependencies.

An external dependency can be outsourcing to expecting a supply delivery, waiting on client approvals…basically anything you don’t really have a say in.

Simply put, preferential dependencies are ones that you prefer to have.

A preferential dependency isn’t mandatory for completing the project. However, you want it because it improves the quality of the project deliverables.

A blogger can edit their work right after completing the writeup. But they may prefer a gap of a few hours before editing to spot more errors. This is a preferential dependency that boosts the blog quality.

But we’re not done!

Some other common dependencies include:

Types of dependencies based on task relationships

Based on this classification, there are four kinds of logical relationships.

The simplest and most common logical dependency in the real world is the finish to start dependency (FS). It helps you visualize sequential project tasks.

For example, if you’re catering at a wedding, you can’t begin food preparation (task B) unless you’ve decided on a menu (task A).

This logical relationship isn’t so simple.

In start to finish (SF) dependencies, you can’t complete the successor task unless the preceding tasks have started.

For example, the catering staff can’t refill the food trays unless the people have started dining.

In finish to finish (FF) kind of dependency in project management, the successor task can’t complete unless the predecessor task is complete too.

For example, you can’t pay the catering staff unless the wedding event is complete.

And finally, we have the start to start (SS) dependency. Here, the successor task can only begin after the predecessor activity has started. After that, both the tasks can run simultaneously as well.

For example, you can start plating the dessert as soon as the mains have started going out. The waiting team can serve the mains while the kitchen team plates the desserts.

How to Manage Dependencies in Project Management?

Okay, now that we’ve got the “what are project dependencies” question out of the way, let’s find out how to manage task dependencies.

Handling dependencies is no joke.

Whether it’s a resource, time, quality, or cost, a project manager must handle everything to ensure that project activities stay on track.

If not, the project will crash.

However, project managers can always make things easier with proper planning and the right tools.

So let’s get managing!

The first thing to do is understanding task dependencies and constraints that can have an impact on your project.

You’ll have to brainstorm a ton to know where all the dependencies exist.

So it’s best if you note every project constraint and dependency you identify.

You’ll see some of the tasks:

But what’s the point of just noting these project management dependencies?

Put them to work with a project management software like ClickUp.

All you have to do is click on the ‘…’ menu to open the action menu for the Task and then add one or more tasks as a dependency type of your choice.

Alternatively, you can create a dependency relationship between tasks using ClickUp’s Relationships.

Additionally, it might just make managing project dependencies easier if you can create a timeline of your project’s tasks.

Well, you can always hit the old marker board to create your network diagram. Or use complex software repository tools like Python to create a dependency graph.

Or… you could ClickUp’s Timeline or Gantt view to identify Dependencies.

You can easily create and visualize your Tasks here. Simply add the start date, Due Date, and other details for each of them, and then start visualizing your timeline!

This way, you can easily identify which tasks are dependent on each other:

Want to learn the difference between the two views? Take a look at our Gantt chart vs. timeline comparison.

2. Add the dependencies to your project charter

The next thing to do is add all the dependencies to your project charter.

If the list of dependencies is short, that’s well and good.

However, if it’s long, only add the essential dependencies to your project plan.

Use ClickUp’s Docs to draft a project charter and document your dependencies.

The rich text editing possibilities in Docs are endless.

You can even Template the outline of your draft in Docs to save time when creating charters for future projects.

Unfortunately, creating a good project charter can be a time-consuming process.

You just draw lines between tasks, and it automatically sets the Dependencies.

Don’t worry about the other chain of tasks.

They won’t get messed up. Instead, the tasks will automatically reschedule.

Don’t forget to add the Milestones to keep track of your awesome achievements.

And most importantly, to grab a drink and celebrate it with your colleagues after work!

Did you identify too many dependencies?

Then it’s a good time to find the critical path.

Finding the critical path helps you prioritize your tasks and dependencies to ensure your entire project doesn’t fail.

Now, we won’t stop you from going back to that marker board of yours to determine your critical path.

But here’s an idea.

You can use ClickUp’s Gantt view to calculate the critical path too!

And all you’ll have to do is click a few times.

And boom! There’s your critical path.

You must always keep your stakeholders in the loop.

When they’re aware of the project dependencies and constraints, they have a better understanding of your functioning.

The project charter can communicate these details to your shareholders.

However, if you’re using ClickUp, you don’t have to send your stakeholders any documents.

Use Advanced Permissions to create Custom Roles and even set specific permission settings for Guests, team members, and admins.

Lastly, as a good project manager, you must constantly track and visualize your dependencies to deliver a successful completion.

To do so, you must track the completed tasks and progress made by different teams.

So basically hours and hours of emails, meetings, and calls? Nope.

You need a project management tool to track project dependencies easily and accurately.

Well, tracking them is also super convenient because of the task dependency notifications and warnings.

So if you’re trying to close a task with Dependencies, there won’t be a mess.

The Incomplete Warning will notify you if it’s a dependent task and is unfinished. So the entire project schedule and tasks are undisturbed.

And you’ll always receive Notifications when:

This way, nothing slips through the cracks!

When it’s time to track these dependencies, just use the Gantt chart, Timeline view, or even the Board view if you enjoy the Kanban approach.

All of these views keep workflow and Task Statuses clear as day, so you don’t have to go around asking for updates.

Depend on ClickUp for Dependencies

Look, dependencies are here to stay.

There’s no project without them.

The good news is dependencies aren’t all bad.

You just need to manage them the right way for successful project management.

And the easiest way to do that is through ClickUp.

Forget documents and software like Python Package Index because ClickUp is the only tool you’ll ever need.

From task management and Gantt charts to Time Estimates and dependency management, ClickUp can do it all.

It’s the ultimate package and an expert at handling multiple projects at a time.

So get ClickUp for free and manage expected (and unexpected) dependencies like a pro.

How to Craft a Meeting Agenda (with Examples + Templates)

The Ultimate Guide to Agile Epics

How To Create a Timesheet in Excel (Step-by-Step Guide)

20 Simple Gantt Chart Examples for Everyone

Project Deliverables: What They Are & Why They Matter

What Is Work Management and How to Implement It? (2021 Guide)