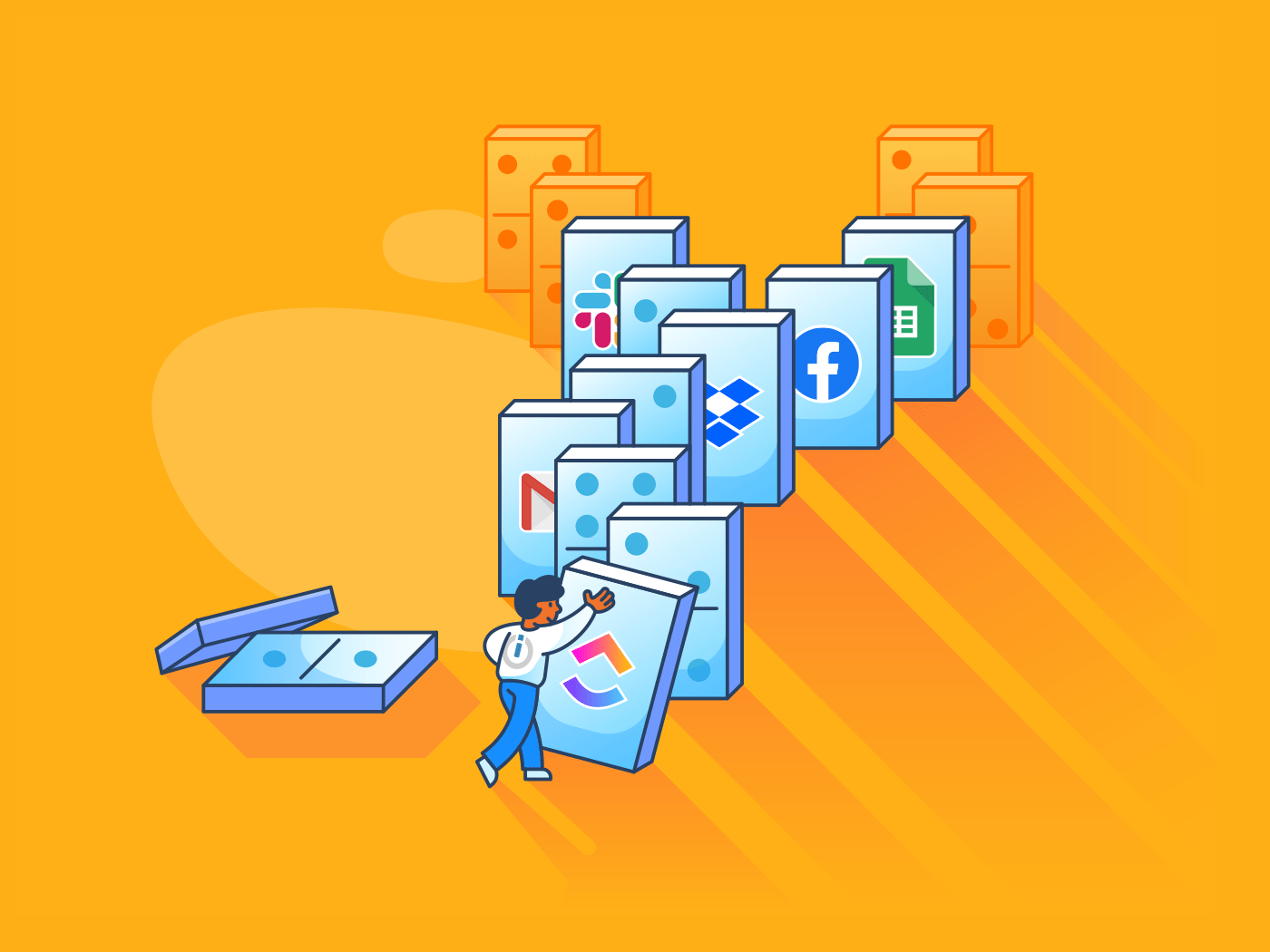 Before writing this story, I came across a sentence on ClickUp’s website that caught my eye:

The words stuck with me as an on-point description of how businesses and individuals deal with their projects, tasks, schedules, and workflows these days: unsuccessfully.

I happen to agree with this, at least partially: in my view, productivity is broken, but not for everyone.

Before Silicon Valley’s golden era of venture capital, choosing the right tools was an easier task.

There were far fewer no-code apps than today, and it was relatively simple to separate the wheat from the chaff.

Companies could choose from a selection of legacy products, a handful of market-leading solutions, and some new interesting players.

You could argue that the tools were worse back then, and I would thoroughly agree. Yet the process of choosing apps was definitely easier, and faster. End of story.

Legacy apps are dying out, former market-leading solutions are aging (not always gracefully), and new interesting players appear every single day by the dozen. Have you been checking ProductHunt lately? It’s literally insane. The decade-old line of “There’s an app for that” doesn’t come close to describing today’s reality.

In other words, millions of apps and infinite choices are keeping us from focusing on the stuff we are supposed to do.

To make things worse, this is happening in a moment where the shortage of IT talent is reaching epidemic proportions. Overworked, understaffed IT departments will help you if they can. Third-party providers will put a high, scarcity-driven price tag for their help.

So, back to our question: what is the right stack of tools? What makes an app worthy of adoption in this context?

For me, an app worth adopting has to check three boxes:

These are the kind of tools that make me think that not all is lost. The tools that, when used for the first time, feel more like a little adventure and less like a headache-inducing riddle.

A Tale of Two Productivity Apps

I got introduced to ClickUp shortly after joining Integromat’s Growth team, and have been using it ever since.

Before ClickUp, I relied on other productivity tools — often because it was what previous employers and clients used. Some of the tools I got familiarized with before using ClickUp include Trello and Basecamp.

Productivity-wise, I found ClickUp easier, smoother and more comprehensive than the aforementioned alternatives. Overall, it has been an empowering experience, since:

And most importantly, I get a clear picture of what I’m doing and what I have to do just by looking at a screen for a few seconds. All things considered, it has been a great experience so far, and a welcome upgrade from the tools I used to rely on.

Now let’s move on to Integromat — a different kind of beast altogether, but also an app that I include in my selection of tools that make the right kind of productivity stack.

Integromat is a cloud-based workflow automation tool. With it, you can connect apps and create workflows out of the blue without using a single line of code.

There are countless uses for a product like this, and that’s what makes it interesting beyond comparison.

Take me, for example. I do SEO and content. My stack includes:

Most apps produce some kind of friction, and I often find myself thinking of ideas to reduce such friction. Before Integromat, these ideas languished on my note-taking app. After Integromat, some of the ideas actually materialize and make my work easier.

For instance, as an SEO professional, I need to make sure that content gets properly indexed by Google’s search engine. Up until a couple of months ago, I did this by hand, following the next steps:

It’s a simple, yet boring task, so I started to think about ways to automate the process with Integromat — something I finally ended up doing by myself (and for those wondering, I don’t know how to code).

The result? I developed a scenario that checks for the indexation status of blog posts (using the posts’ URLs) and notifies me whenever a post has not been indexed by Google’s crawl engines.

This is just a simple example of what Integromat can do. And the best part of Integromat is the range it gives, making automation possible for countless workflows touching every professional field you can think of — including, of course, productivity.

Most modern products feature a series of native integrations that provide an extended set of features to the product, working as an answer to what many users need and demand.

However, it’s just not possible (or very wise) for companies to start developing countless integrations that solve more granular problems.

This is where Integromat kicks in.

You can look at it as a reinforcement for products, augmenting their power and reducing the friction between app ecosystems.

In this sense, ClickUp is not different: it is common that pieces of information originating in other apps end up on ClickUp as lists, tasks, comments, statuses, and more. And sometimes, this produces friction or takes valuable time from our workdays.

Let me illustrate this with a simple example: let’s suppose I’m a marketing agency specialized in social media, and that one client wants me to create Facebook posts they get ideated.

There is no schedule, and I need to be aware of incoming emails from my client to create the posts. Moreover, I use ClickUp, but my client doesn’t, and I don’t want to make the client go through yet another learning curve.

The problem here is pretty clear. I need to:

Since I have a lot to do, there is a very real chance that at some point I will miss an email from my client and forget to create the post. But hey! I’m also an Integromat user, so there’s no need to worry.

To avoid missing incoming emails from this client, I create a Gmail – ClickUp – Facebook Pages integration. This way, whenever I get an email from this client, a task will be created in a list I specify with the contents of the post (a piece of copy and a visual element), and a post featuring that content will be created on a Facebook Page of my choice.

And that’s one problem I don’t need to worry about anymore.

Needless to say, there are many ready-to-use templates for ClickUp available on Integromat.

The true power, however, resides in your own imagination. If you come across something you are not sure how to integrate, you might want to give Integromat a try.

Wrapping Up: A New Era for Disruptive Products

It has been said that successful apps solve problems, but I’m starting to believe that’s a cliché we’ve inherited from the early 2010s venture capital boom.

We have entered the era of granularity, marked by countless little problems instead of a handful of easily-recognizable ones.

This applies to every field out there: even productivity comprises millions of different problems, dots in an expanding universe.

The key to succeed over granularity resides in not having to get a new app for every different micro-problem. In other words, we need to stop incorporating granular apps to solve granular problems.

The whole situation reminds me of a short story written by Jorge Luis Borges, titled “On Exactitude in Science”.

In it, the cartographers of an empire decide that the ultimate map of the world has to cover the entire world, inch by inch. Of course, since the map is as big as the world it is supposed to represent, it becomes utterly useless.

I feel the same way about the current state of things. If we keep choosing tools that solve granular problems, we will end up with a stack as large and diverse as the problems we are trying to solve.

10 Best Lucidchart Alternatives for Diagrams in 2022

21 of the Best Calendly Integrations to Know in 2022

Notion Vs. Evernote Review | Which is the Better in 2022?